A food blogger has revealed the shocking differences between ingredients lists in UK and US, foods, showing how American items are laden with artificial flavourings and E-numbers that are banned elsewhere.

Vani Hari, who goes by the moniker The Food Babe online, showed the differences between common goods sold on both sides of the Atlantic, including Kellog’s Frosties, Heinz Ketchup, and Cadbury’s Creme Eggs.

The influencer, 41, from North Carolina, who has more than 450,000 followers on Instagram describes herself as a ‘healthy living activist’ and shocks her followers by showing the likes of preservative BHT (butylated hydroxytoluene) and artificial colouring in US products.

Scroll down for video 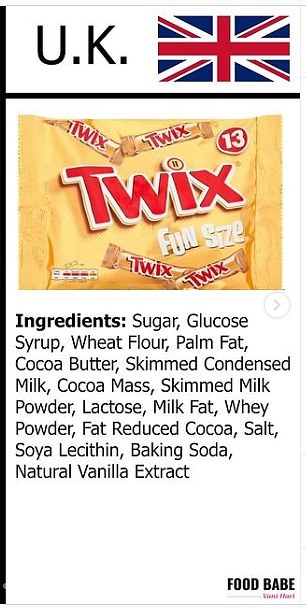 A food blogger has revealed the shocking differences between ingredients lists in the same foods in the UK and US, showing how American foods are laden with artificial flavourings and e-numbers that are banned elsewhere. Pictured US vs UK Twix 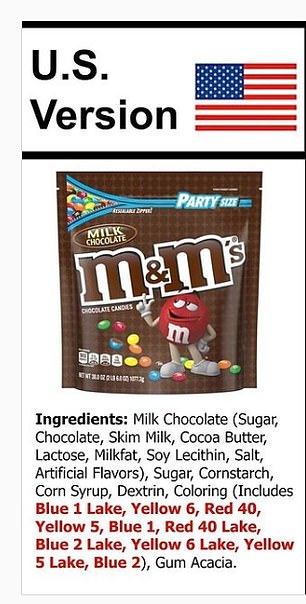 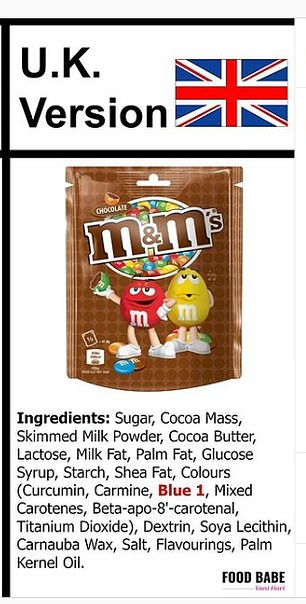 Vani Hari, who goes by the moniker The Food Babe online, showed the differences between common goods sold on both sides of the Atlantic, including Kellogs Frosties, Heinz Ketchup, Creme Eggs and M&Ms (pictured)

While the list of British Twix ingredients seems fairly standard, with sugar, cocoa butter, and milk, the US version contains polyglycerol polyricinoleate – a cheaper substitute for cocoa butter – and artificial flavours.

British M&Ms only have one E-number, known as Blue 1, while the US version has more than ten, and also contains cornstarch,  corn syrup and gum acacia.

Why does American food have so many E-numbers?  And what’s the difference in law in the UK?

Different laws in the US versus the UK and EU mean chemicals are more present in American versions of the same foods.

Due to lack of restrictions, food is often produced cheaper with e-numbers

For example,  BHT (butylated hydroxytoluene) is a lab-made chemical that is added to foods as a preservative. It’s generally recognised as safe in the US, but is restricted in the EU due to evidence that BHT causes cell division.

Other additives banned in the EU and UK but legal in the US include:

Even McDonald’s, known for its uniformity across the world, features in the lists.

Studies have shown high levels of the hydrogenated fat can upset the balance between good and bad cholesterol in the  body.

‘Although artificial dyes are common in America, that doesn’t make them safe to eat,’ Vani said in a caption of one picture.

She explained that in the EU and the UK, food companies are required to include warning labels if they use artificial dyes – hence many opt not to use them.

‘That’s one reason the UK version is so different, she added.

‘Companies don’t want to slap warnings all over food packages because that wouldn’t be good for business.

‘To make matters worse, they add high fructose corn syrup, cellulose gum, and artificial preservatives to the US version.

She believes that US companies continue to sell the artificial ingredient-laden products because they’re ‘cheaper to produce’ and ‘they can get away with it’.

In one example, she calls out the way Red 40 is used in the production of Doritos in America.

Red 40 is a ‘certified colour that comes from petroleum distillates or coal tars’ and The US Food and Drug Administration (FDA) mandates that it has to be listed by name on food and product labels. 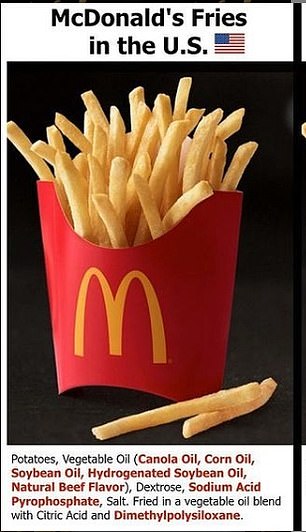 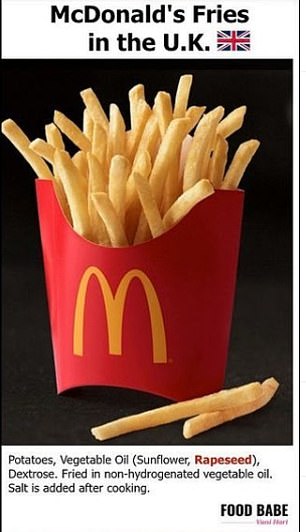 Even McDonald’s, known for its uniformity across the world, features. The fries in the US contain hydrogenated oil, while the UK’s features non-hydrogenated oil.

The influencer, 41, from North Carolina, who has more than 450,000 followers on Instagram describes herself as a ‘healthy living activist’ and shocks her followers showing the likes of preservative BHT (butylated hydroxytoluene) and artificial colouring in US products. Pictured: US Frosties with BHT (left) and UK without (right) 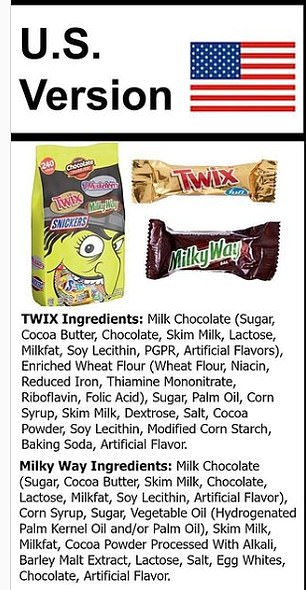 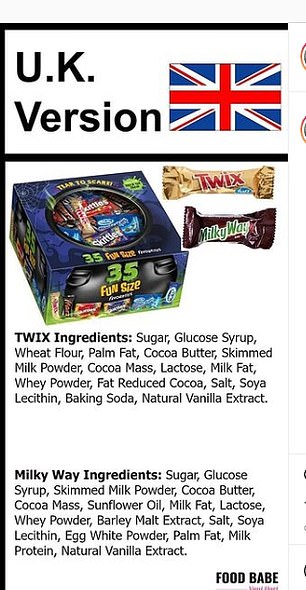 Vani’s graphics have also been picked up by TikTok users – who are equally shocked at the chemical-laden products.

Corey Ewings, from San Diego, posted a video showing the long list of ingredients in American strawberry and cream porridge oats and the British version sold by the same company.

In the US, the ingredients include sugar, maltodextrin sodium caseinate, red 40, salt, gum and artificial colouring.

Yikes! A packet of Doritos sold in America, left, is shown to contain controversial chemical compounds like ‘Red 40, Blue 1 and Yellow 5’ – but they aren’t used on the UK version

What are food additives?

Food additives are ingredients that are added to foods to carry out particular functions, according to the British Food Standards Agency (FSA).

In the UK, manufacturers must provide information about any additives used in the foods they produce. You can find this information in the list of ingredients on the packaging. It will tell you what each additive does, followed by its name or E number.

Food additives are grouped by what they do.

FSA studies show  artificial food colours could cause increased hyperactivity in some children. In particular

Food and drink containing any of these six colours must carry a warning on the packaging. This will say ‘May have an adverse effect on activity and attention in children’.

‘Okay, I have one simple question, America, what are we doing?’ Corey asks in the clip.

‘One of my followers asked me to look up the difference between oatmeal in the UK and the US,’ he explains.

Culpit: Red 40 once again appears on the label of Quaker’s Strawberries & Cream Instant Oatmeal when it is manufactured Stateside, left

‘I might not be the smartest person in the world, but I can read a little bit.

He then turns to the US version and jokes ‘like I said, I can read, but I don’t know what any of this means.

‘Maltodextrin sodium caseinate, red 40, that sounds scary. Can someone smarter than me please tell me why we need so many extra ingredients? 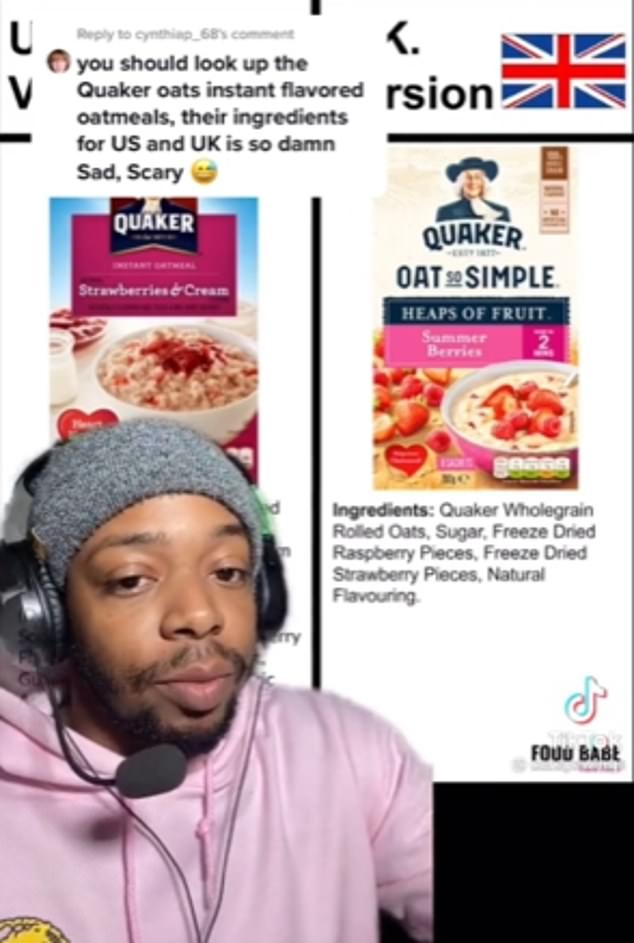 Vani’s graphics have also been picked up by TikTok users – who are equally shocked at the chemical-laden products.

‘There’s plenty of examples too. Are we just test dummies? What’s going on?’

In other videos Corey has discussed US  food banned in other countries including beef that’s been hormone treated, chlorinated chicken, Little Debbie’s Swiss Rolls and Kellog’s Frosted Flakes.

He also mentions Skittles, which are banned in Norway and Sweden, farm raised salmon, which is banned in Australia and New Zealand and even some milks, bread, and energy drink Mountain Dew.

Chocolate surprise: A comparison shows the use of artificial Yellow 6 in Creme Eggs sold in the U.S., whereas in Britain paprika extract is used